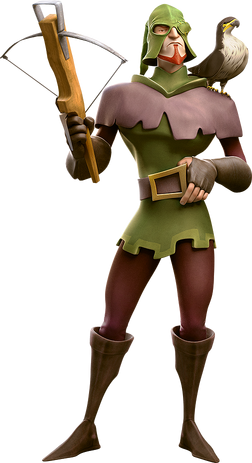 With just one application of his signature one-eyed scowl, Blackeye Bowgart can make even an innocent bunny rabbit want to rethink his life decisions.

In his days as the leader of the Green Leotard Thievery Corporation, Bowgart and his revealingly-clad bandits unleashed a crime wave so massive that it led to 'being robbed' becoming an official income tax deduction. The expression 'hail of arrows' might sound like some kind of charming metaphor, but don't tell that to those who’ve seen Blackeye fire off 100 perfectly-placed rounds per minute with his trusty crossbow. What he may lack in depth perception, he more than makes up for with intimidating long-range deadliness. 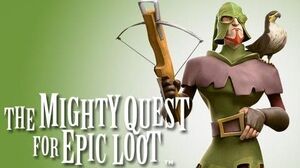 Retrieved from "https://themightyquest.fandom.com/wiki/Archer?oldid=10549"
Community content is available under CC-BY-SA unless otherwise noted.